How To Stop Global Overheating?

Fossil Fuels That Stay In The Ground Never Become Emissions

I used to think I knew all about Climate Change. I knew the physics. I knew how the carbon numbers kept on increasing. I knew that renewables were a winner. But I was being suckered. I knew nothing was improving, but I couldn't see why. It was because the whole world, me included, was being systematically diverted from the obvious solution, so that Big Oil could continue business as usual.

I believe the only way out is to take emergency global measures to ration carbon extraction at source. All companies extracting carbon would have to buy sufficient Carbon Extraction Quota on the open market. The quota would be issued equitably by allocating it to all countries based on population size. As the quota decreased over the years, market forces would decrease carbon emissions with certainty and also enrich countries with low carbon economies. These measures are a comprehensive but necessary change to ensure that the world energy systems move to renewables and global overheating is stopped. 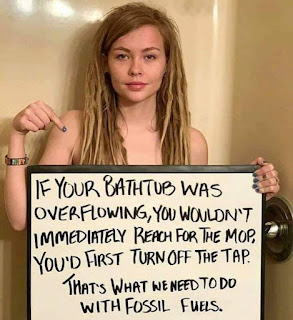 Since it's generally agreed that Climate Change from Global Overheating is caused mostly by the extra carbon dioxide (CO₂) humans are continually adding to our atmosphere by burning carbon; obviously we need to work out the most effective way to stop burning carbon globally. It can be done because we've fixed a similar problem before.
A Similar Solution That Worked
The Montreal Protocol fixed another global problem with the atmosphere, where chlorofluorocarbons (CFCs) were making holes in the ozone layer; we can learn from that. The Montreal Protocol worked because the chemical companies manufacturing CFCs were forced to replace CFCs with better alternatives. CFCs production was controlled at source. Since this approach worked so well, doing the same for carbon must be a contender for the most effective way to stop Climate Change.
Alternative Solutions Won't Work
Current proposed solutions range from trying to persuade every individual on the planet to switch to a zero carbon lifestyle, through a range of methods to limit carbon emissions when carbon is burned, to national taxation of carbon fuels, coal mines, oil and gas wells. None of these methods are the most effective way to stop CO₂ emissions because none of them are comprehensive in coverage nor watertight. See my Heating Overview page for detail.
Solution Details
The most certain way to control carbon has to be at source, where it is extracted. There are many 'Keep It In The Ground' campaigns but they are all aimed at specific local individual fossil fuel extraction projects or possibly national policy. But any effective scheme has to be global. This seems so obvious to me that I was really surprised that I can find no such proposal in existence. So maybe I am the first to propose a tradable Carbon Extraction Quota scheme. In this scheme any company wanting to extract carbon would have to obtain the necessary quota in advance. An international body such as the Intergovernmental Panel on Climate Change (IPCC) would set a periodic Carbon Extraction Quota that started at roughly current global total usage and decreased to sustainable levels as quickly as possible while allowing for time to switch to alternative energy sources.

On the principle that every human being on the planet has an equal right to Carbon Extraction Quota I think that quota should be issued to each country in proportion to their population. Countries would then sell quota to carbon extraction firms in an open market. As the quota decreased over time it would become more valuable and low carbon economies would benefit. Since the countries which would benefit most are the developing countries, this scheme would also stabilise international tensions by decreasing global wealth inequality. Developing countries who have not benefited from early industrialisation would also be automatically compensated and be more likely to buy into the scheme.

Closing Loopholes
Since the vast majority of burned carbon is from fossil fuels, why haven't I called this scheme a Fossil Fuel Extraction Quota? - Loopholes. There are so many holes in existing CO₂ emission schemes that I can envisage a time when similarly, other sources of carbon, such as peat and timber will be even more exploited than they currently are if they are not included, along with all nonrenewable sources of carbon.

Global commitment (buy in) from all countries is required for any scheme that attempts to control CO₂ emissions. As an example, if the USA with just over 4% of world population and just over 14% of emissions failed to commit to a global scheme it would fail. So if all countries have to agree to any global scheme why not make it a scheme that is certain to work.
Why won't the other carbon control methods work as well?
Carbon emission controls act so late in the process that it is impossible to control all emissions with certainty because there are thousands of times more emission points than extraction points. Carbon emissions from aircraft and ships are not counted and it is far to easy for countries to export embodied emissions to other countries by doing dirty industrial processes abroad - another reason why a simple global scheme is required.

Individual Action.
I don't believe anything like 100% of people can be persuaded to switch to a zero carbon lifestyle, and the numbers required to be effective have got to be a lot nearer 100% than 50%. Now it doesn't take much more than 50% to effect political change and regulation changes to enforce a carbon reduction scheme so the political route has to be more effective than isolated individual action. The lifestyle change campaigns are probably still necessary to prepare people with the skills necessary to live without carbon but they are not sufficient in themselves.

What about geoengineering?
All geoengineering schemes have drawbacks which all seem to boil down to the problem of the serious side-effects of polluting our planet in other ways. All the global dimming schemes from a massive sunshade in space between the sun and us (balanced at the Lagrange L1 point) to sulphur dioxide aerosols, would not stop acidification of our oceans from increased levels of CO₂. Only increasing nutrients in the oceans to accelerate the rate at which carbon is taken up by life and sequestered seems a possibility but the side effects, cost and effectiveness of experimenting with our ecosystem are massive unknowns, and if it doesn't work we are delaying while climate is still changing. Such procrastination could take us beyond tipping points that make it impossible to return to normal. Mind you the IPCC Fifth Assessment Report (AR5) of 2014 Future Pathway RCP2.6 implies that some bulk method of extracting CO₂ from the atmosphere is needed to keep below 2°C.

A tradable Carbon Extraction Quota scheme is the most efficient and most likely to be adopted scheme that I can think of. Every country in the scheme would have to inspect and audit every company extracting carbon in their area of control. Extractions from sea beds in international areas would also have to be inspected and audited. Extraction Quota would also have to include any waste carbon that ends up as CO₂, such as methane gas that escapes during the extraction process, not just methane that is flared off - all of it ends up as CO₂ eventually.

These are my outline thoughts that may be modified by new information. Maybe someone has already published ideas around a tradable Carbon Extraction Quota? If so it was not assessed in AR5 by the IPCC.

Before global decision makers would consider this new quota, they need to be assessed by the IPCC. The IPCC only assesses items published in certain peer reviewed academic journals. So this idea needs to be worked up into a publishable paper. Does anyone know an academic who would be interested?

All comments are welcome, as long as they are not defamatory, and will be published after checking.